Thermal mass stoves are a relatively unknown in the mainstream wood stove market, however they have a dedicated following in many parts of the world where they form part of their local architectural traditions. The basic principal of all thermal mass stoves is that they trap the heat generated by a hot, efficient, fire and release it slowly into the building's living space.

Unlike traditional open fireplaces and wood stoves the vast majority of heat that would otherwise be wasted up the chimney in flue gases is extracted before the gases leave the chimney.

The thermal storage is usually provided by a large mass of a dense material, typically stone, brick, tile or (less commonly) water. The flue is ducted in such a way that it travels a long distance through this mass. This length of ducting is usually the most troublesome aspect of thermal mass stove design as there needs to be adequate draw of fresh air to the fire.

Some stoves can store heat for up to 24 hours, reducing or even eliminating the need of most wood stoves for regular fueling throughout the day.

Thermal mass stoves come in a wide variety of shapes, styles and construction materials and can have an equally wide range of internal designs which can rarely be appreciated from the exterior.

Russian fireplaces are the original thermal mass store - this traditional design of fireplace is constructed directly into the fabric of the house and chimney. A brick chimney is constructed with a convoluted flue which helps the whole chimney absorb more heat from the flue gases which are then released back into the building. The traditional forms can suffer from some of the draw backs associated with open fires and uncontrolled drafts however this could be mitigated by combining it with a modern efficient firebox. Requiring, as they do, substantial construction work in the very fabric of the building they are unlikely to be a useful solution for the typical homeowner.

Some of the most elegant are soapstone wood stoves , which incorporate large masses of attractive soapstone around their fire box. These stoves can be free standing (which makes them appealing for many home installations) however they typically weigh less, and therefore can store less heat, than other types. Soapstone is favoured particularly for its attractive appearance, good thermal conductivity and resistance to thermal cracking. Soapstone has been used extensively in areas of North America, but is becoming more widely recognised in recent years.

Cob rocket stoves are the least technologically oriented and are ideally suited to rustic and environmentally sound building methods. Cob (a building material made from sand, straw and wet clay) is moulded around horizontal flue pipe to construct furniture, floors or other structural household elements. The organic shapes that can be formed by cob can be very welcoming and the whole stove can be constructed cheaply using mostly recycled parts.

Working with cob is an excellent project for a keen DIYer, especially when integrated into a new cob building.

Masonry heaters combine the best of both worlds - they can be elegantly constructed to produce a valuable item of furniture while using cheaper masonry bricks to provide the thermal store. Larger and heavier stoves can be constructed at reduced cost, although they usually require specialist builders.

Over the past few years the masonry stove industry has been booming... people are realising the benefits of these stoves in terms of ease of operation and comfort in the home. The construction has been refined and now many companies are making masonry cores; kits of precast refractory brick that can be easily stacked together to make the guts of a masonry stove. These cores can then be clad in stone, brick cob or any other heavy building material by a skilled bricklayer. We have researched these at length for our new home and were very impressed by the potential in them.

Many designs come with optional bread ovens, can be built to heat multiple rooms and stories of a house and can be shaped and clad to suit any interior design tastes. These are a brilliant solution if you have funds and are considering a major rebuild or are designing a new property. Because of their size they are not so good for smaller or older homes. 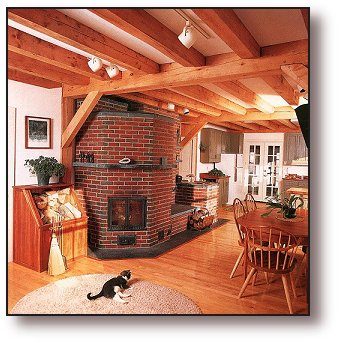 Other applications of Thermal Mass

Heat storage pops up in some other household appliances - you may have seen the old oil filled storage heaters that use cheap night time electricity and then release heat during the day.

I recently came across an electric Aga retrofitted in a similar way to use cheap night time electricity. A cozy and practical solution for a location where mains gas is not available.