First up, a confessions. I'm a huge fan of these rocket stoves. They bring together all the aspects of sustainable living and design that make wood burning so appealing in the first place AND the end result is an attractive, warm, comfortable piece of furniture that you can build yourself!

I have built and used smaller cook stove versions of these - when you first see one going you'll understand the name. The roar of the flames is like a rocket jet firing off. Two of these running and a couple of frying pans does a mean cooked breakfast for 40 hungry campers on no more than a few handfuls of pencil thick twigs.

Rocket stoves come in many guises:

While the scale varies they all work on the same basic principals and consist of:

depending on purpose this could be a simple cook pot, a copper coil for water heating or a large thermal mass 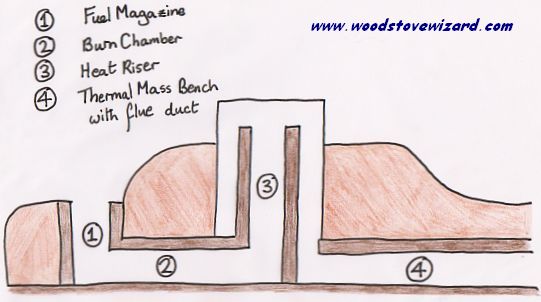 Fuel is loaded into the magazine (usually longer and thinner pieces than would normally be burnt) and fed into the combustion chamber. Air is drawn into the chamber past the fuel load and the ends of the sticks burn rapidly, usually with the characteristic roaring rocket sound. Combustion is rapid and hot to ensure maximum efficiency.

While the gases are still hot they pass upward through an insulated heat riser (internal chimney) then back down through an uninsulated channel. This provides sufficient draft to keep the fire roaring away.

The gases are then directed through up to 20ft of channels built into a large thermal mass where the heat is trapped and released gradually into the room. Within limits these channels can have any orientation and can be built right into the fabric of the building, or into purpose built heated benches or beds.

The gases leaving the end of the flue are usually feel warm and slightly damp, with no hint of a smoky smell - a testament to how efficient the burn and heat extraction is.

Given their recent roots in the appropriate and alternative technology movements they have yet to be commercially developed so the majority of installed units are constructed by enthusiastic DIY homeowners/homebuilders. The typical stove can be constructed for around $100 worth of scrap and salvaged parts and assembled in a weekend.

Most of the components (oil drums, fire bricks, steel flue pipe etc... ) are readily available however the bulk of the thermal mass is usually constructed from Cob (a clay/sad/straw mixture that is sculpted into place wet and allowed to harden. This traditional building method has been used for many hundreds of years and many fine old buildings exist around the world that have stood the test of time. Aside from the thermal mass itself, Cob has the added advantage that the final shape can assume curved and artistic forms not possible in other thermal mass stoves and can be constructed into whatever form is most appropriate for your living space.

You can find examples online of Cob stoves that have formed the structural support for a central stairway, benches, beds, walls, underfloor heating etc... Where you go with it is really only down to your own ingenuity and current physical setup.

Here is a rough and ready outdoor cob rocket stove.

As with most thermal mass stoves, they store and gradually release heat from small, irregular fires. Your own one will need some experimentation to discover how much fuel and how often you need to light it up as this will depend on the size and configuration of the thermal mass portion. Typically one hour lit each evening will maintain the heat through to the following day.

As an added benefit, the thermal mass can aid house cooling in summer as it absorbs daytime heat from the room and releases it over night.

Ianto Evans is the driving force behind research in this field. He has spent over 30 years working with stoves and improving on designs. If you are thinking about building your own you couldn't do better than to check out his Rocket Stoves site and buy his Ebook which covers the ins and outs of stove making, practicalities of building your own, materials and loads of photos to make the process nice and clear.

Thermal mass stoves in general have yet to achieve the widespread acceptance they deserve, and rocket stoves are the new kid on the block in the thermal mass family. With that status come a few potential downsides.

Perhaps not an issue if you are not planning on selling, however the effect of adding a rocket stove to home values is unknown - you may find a 'green lifestyler' who loves it but the vast majority of buyers still prefer to go with the familiar

Most thermal mass stoves, but rocket stoves in particular, require very strong foundations to support the multi-tonne weight and a large floor footprint to accomodate the mass. When building a new home the mass can be incorporated into structural elements (walls, stairways, floors) however in existing buildings this is likely to be more difficult

There is some evidence that rocket stoves may need occassional internal maintenance (eg. rebuilding the heat riser, replacing metal parts) - this can most likely be mitigated by building the internal components of high quality materials as opposed to scrap. This may add slightly to the cost and complexity of the build process but may result in a more attractive finished product (no exposed old oil drums on view).

I for one will be including one when I finally get to build my dream house (most likely made of cob, a few acres for some sheep and a vegetable plot - I've spent the summer wandering around suffering from garden envy). They are the only thermal mass stove currently, in a reasonable budget, available to a DIYer and already have a dedicated following in the appropriate technology crowd. They are unlikely to be suited to a standard residential setting but if you can see how to include on in your property then they are well worth the investment.