Hickory Firewood is among the best firewood types - it is dense, long burning and lays down good coals. When well seasoned it is great wood for burning, and when still a little green is prized for the flavour the smoke imparts to food.

The name Hickory actually refers to wide range of different tree species, all of the family Carya. They are nut bearing, producing a copious edible nut crop after 15 years (10 years on grafted root stocks). The nuts themselves form in a fibrous husk and have a very hard shell beneath. While considered edible the shells are challenging to crack and the flavour of some varieties is very bitter and unpalatable - the aptly named "bitternut hickory" is a prime example.

The picture below shows a fresh fallen nut. When properly ripe the outer brown husk falls away from the pale hard shell of the nut inside. If picked too early the husk can be even harder to remove than the shell. Waiting a little longer saves effort, but you risk your hickory nut crop being stolen by squirrels and other wildlife. 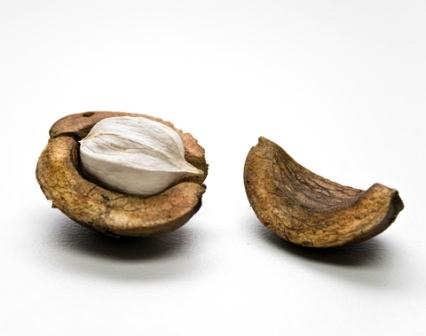 Hickory Wood has been long prized because of its excellent physical properties - it is hard, stiff, dense and shock resistant which makes it a prime candidate for high impact uses. Hickory was the favourite wood for many tool handles such as axes, where these properties are important, but also baseball bats, golf clubs, paddles and hard wearing flooring.

Hickory Firewood is prized for cooking due to the aromas the smoke imparts to food, in areas where it is available it is used for barbeques instead of charcoal and pieces of greener wood may be burned during cooking especially to produce extra smoke. Hickory chips are used in smoking huts when larger quantities of meat need to be smoke preserved.

While there is some variety in the different species all varieties of hickory are dense, which in firewood leads to high energy content per cord. Hickory can be comparable to oak and even anthracite coal. Some sites suggest that hickory will season within 6 months to a year, however these are often people selling firewood which has been seasoned for 6 months! Perhaps their motives are not entirely pure?

Here at WoodstoveWizard I would always recommend that hardwoods are seasoned for a full 12 months, preferably 18 for optimum burning in a wood stove. If you are buying firewood, try to get enough for a year ahead and season it properly yourself - it makes a big difference. Overall hickory firewood can be considered the king of your wood pile, it has been treasured for generations and kept the early American settlers warm, while also providing them with tool handles, nuts and wagon wheels.