Yew is rather uncommon as firewood because the tree itself is quite rare and slow growing. Some of the oldest Yew trees are many hundreds of years old and, in the UK, are found predominantly in church yards.

Yew was historically highly valued because its wood was ideal for making longbows - the dense dark heart wood was strong under compression while the much lighter sapwood bends and stretches under tension. Unfortunately all parts of the tree are poisonous and could kill cattle so specimens in farm land were systematically cleared. Churchyards, traditionally with a stone wall around them, were safe from cattle so it is here that the the oldest trees can be found.

These days Yew is no longer needed for bow making but chemicals within it are be researched for making heart medications. Anecdotally I've even heard of places buying yew clippings from hedges to extract drugs from!

How does it burn?

We were lucky enough to get hold of a few decent yew logs which had already been seasoned for around 8 years. Under normal circumstances you wouldn't be able to fell a yew tree, however these had been accidentally killed by the previous owner of land (through overly aggressive pruning) and the logs were dumped under cover. 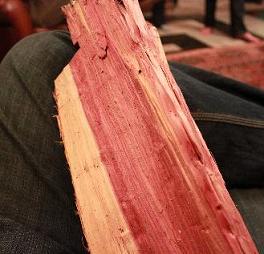 After fishing them out I bucked and split them down to size for our wood stove. The heart wood has a beautiful rich red colour and, if it wasn't so poisonous, I'd have tried a bit of carving on one. The logs are seriously dense and heavy, comparable or perhaps even denser than oak.

When burning yew we found they needed a good hot fire to get started but once going laid down wonderful slow burning coals with little flame. We usually need to reload about once an hour but were managing two hours easily with these logs.

We left some larger pieces unsplit and, when loaded they kicked out serious heat for around 5 hours - exceptional in our stove.

Overall I'd say yew is one of the best firewood types for burning, although nearly impossible to obtain. Just don't try using it in a barbecue as the smoke may well be poisonous!

As we didn't have the wood from green I'm reluctant to say how long it would take to season fully but it is a fair bet that wood this dense and hard would take around two year, possibly even three, to be at its best. If you get some of this hoard it for that special occasion - you won't be disappointed! 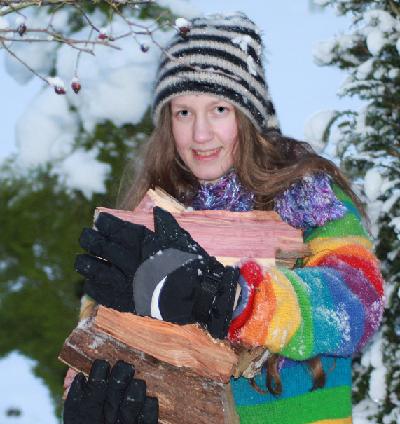