Firewood Types : Silver Birch, Betula Pendula, is probably the easiest tree in the woods to identify. It's distinctive silvery white bark is very obvious in woodland and it's firelighting properties make it a tree worth noting.

Aside from the very distinctive bark you can also identify birch by the shape of the leaves (small and heart shaped) and by the natural soaps in the leaf. Rub some leaves in your hands with water, or spit, and they will foam up a little. Trees are often killed by a decay fungus; dead trees should be harvested rapidly or they will rot away rapidly.

Unfortunately silver birch firewood isn't first class - it doesn't have the same density as the old favourites such as oak and hornbeam so a cord of birch won't go as far for heating. Birch firewood also tends to decay more quickly than, for example, sweet chestnut, because it has a much lower tanin content and a high sugar content. Leave it on the ground for a few months and you'll soon have a pile of rotten wood. 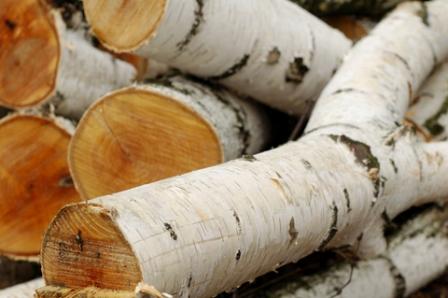 When burnt, silver birch firewood tends to burn down rapidly with hot flames, but leaves very little in the way of embers. In a wood stove this would mean regular loading and, possibly, swings in temperature between reloads. I found this out for myself the hard way when on a bushcraft course - one evening was spent camped under a stand of silver birch trees and we spent most of the evening going to and fro to collect more wood, and alternating between too hot, or a fire that was half out! Needless to say the following night's camp was much more comfortable as I collected a supply of spiney oak before it got dark.

Silver Birch bark is pretty much water proof, and was traditionally used to make large canoes in North America. What this means is that logs dry very slowly - so slowly in fact that they can rot before they are seasoned! To speed seasoning of silver birch it is especially important to split logs at least once to expose the wood. The picture below is of some split, stacked and seasoned birch firewood logs; notice that the bark is beginning to peel off them? Keep that for later! 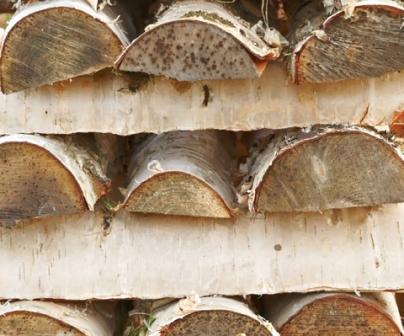 Silver birch is also famed for it's firelighting properties as it's bark contains a waxy resin which is both very flammable and water proof. In fact the name of the plant, betula, shares the same root as our modern word bitumen! The oils in the bark make it very resistant to decay and you often find pieces of unblemished bark tubes with the wood totally rotten away!

Gather some birch bark one your travels for getting your fire going in the evening and your can be assured of success. If you have a knife you can rub the inner surface to make a powder which ignites easily, or shred the bark down to fine strips. Light with a match and it will burn quickly and intensely to get your kindling going, even in the worst of wet weather.

Bundles of birch twigs also make outstanding kindling as the fragile stems often snap in strong winds and get caught up above the ground where they stay dry. Collect a big bundle to place on top of the birch bark once your fire is going.

Firelighting In Your Wood Stove

If you have silver birch firewood you will probably find the bark falls off as the wood dries. Don't discard it, instead collect it and keep it in a box near your stove to use instead of traditional firelighters. Much more environmentally friendly than those paraffin blocks!

Silver Birch is fine to burn if it is what you have, but you will probably need nearly twice as many cords of wood compared to denser logs such as oak. Birch firewood is likely to be cheaper to buy than other hardwoods, because it is a low value timber and often cut during woodland thinnings.

If you have a few large silver birch trees you could also try making your own birch syrup or wine from the sap. As with sugar maples drill a hole in the trunk in winter and drive in a spigot so that you can catch the flowing spring sap. Birch sap is fairly high in sugars (around 1% by volume but this varies through the year and from tree to tree), although substantially less than maples (around 2%).

While it can be drunk directly from the tree it can also be fermented to make a mild alcoholic wine, or condensed by heating to make a delicately flavoured syrup, similar to maple syrup.

If you are interested in learning how to tap trees for their sap you could try The Maple Syrup Book. While it is obviously written for those with the luxury of sugar maples, many of the techniques and recipes transfer well to silver birch.

Silver birch carves and splits easily and has a beautiful sweet scent and pale colour. Provided you choose a piece without knots it makes great stock wood for carving wooden spoons, spatulas and other utensils. With a bit of practice and the right tools I can now knock up a servicable eating spoon in about 45 minutes, all you need is a basic bushcraft knife, a simple folding saw, and a spoon gouge. None of the tools are expensive and provide endless opportunities for making useful and beautiful implements.

When outdoors silver birch is one of the most reliable firestarters available - bark contains large amounts of flammable oils and it is easy to collect large bundles of very dry, very fine (match stick size) twigs from the ground beneath it, and from caught up in the lower branches.

Glue from the resin

Collecting bark and heating can yield a sticky liquid resin. Boiling it down makes a strong and water proof glue which Native American's used routinely when making and repairing birch bark canoes. Mixed with ground charcoal it makes an excellent and portable firelighter.