Note the relatively thick stem, the gills running down to the stem itself, the broad grey top. 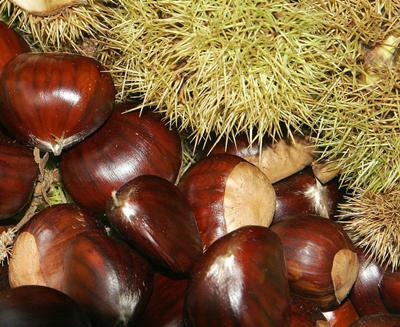 Well, autumn is well and truly upon us - leaves are falling throughout the woods and the canopy is opening up. We spent a lovely few hours down under the tree before meeting the expert about our Woodland Management Plan. We got a fire lit and spent an hour or so toasting Sweet Chestnuts in the embers of the fire.

I can't remember a year when the trees have been so prolific, dropping both huge numbers and great big fat nuts. After a couple of false starts we decided that splitting the skin down the side of the nut with my knife was a good idea. The first batch exploded vigorously, catapulting themselves around the camp area.

We also saw plenty of clouded agaric mushrooms, growing in vigorous rings about 20ft across! According to my mushroom book they "used to be considered edible" - apparently they can cause stomach upsets in some people. I'm tempted to trial them in a small portion one day, and then cook up a nice big dish a few days later. If it turns out we can eat them fine we should be able to collect about £20kg easily.

They have a fairly strong scent - we found it quite pleasant, while some apparently describe it as sickly. It isn't a classic "mushroom" smell.

We brought a nice load of the chestnuts home with us and have since been toasting them on the wood stove. Yum!

Join in and write your own page! It's easy to do. How? Simply click here to return to Woodland Diary.